Graphic designer Carole Ohl created a dozen magical Zentangle-style dog illustrations for I HEARD YOUR DOG DIED: Imaginings for Those Who Have Lost a Pet. Each of the dogs was a beloved pet that touched its family’s life with unconditional love. This is the story of Sadie whose portrait leads off Chapter 4.

Sadie was a coal-black Labrador retriever carefully and deliberately chosen from a litter bred from search-and-rescue bloodlines. True to her rescue ancestry, she bonded closely with her mistress and lived to serve. True to her lab ancestry, she fixated on food lived to eat. Keeping her at a fit weight involved much outdoor exercise and great fortitude in the face of pleading brown eyes above strings of drool. Among her adventures and misadventures were emergency trips to the veterinarian to deal with socks eaten off the floor (did I mention she was a lab?) and bunches of grapes snagged off the counter.

Sadie’s most memorable adventure, however, occurred far from her Ohio home. Sadie and her mistress joined a wilderness skills group kayaking the New River in West Virginia. In hindsight, this legendary river was not the best choice for an introduction to white water kayaking. But in love and eager to please her husband-to-be, Sadie’s owner dared to move things up a notch from paddling Ohio’s gentler waters.

The first day went well enough. The second day was more challenging. The group put their kayaks in at a location where the river began a passage through wild landscape. No road paralleled the waterway. No trails wandered along the high banks rimmed with thickets and dense stands of trees. Once in the water, the kayakers had no way out except to float downstream through a string of rapids to the take out location several miles downstream. A member of the group staying ashore with two dogs of her own agreed to take Sadie into their small pack for the weekend. She waited with the dogs and the shuttle vehicles for the group’s arrival at the take out spot.

Halfway downriver to the take out, Sadie’s mistress encountered difficulties. Her kayak swamped. Shocked and soaked by the frigid water, she lost her paddle. With no way out but down the river, group members rallied, roping her kayak down rapids but it was slow going. Wet, cold, and shivering, Sadie’s owner felt her mind shutting down as well as her body. Then, through her hypothermic daze, she heard scrambling along the riverbank above her. She looked up and saw Sadie, framed in a shaft of sunlight. “It was like seeing an angel.”

Back at the landing, the dog sitter turned her charges loose to play a bit. Suddenly, Sadie took off, not just to go exploring, but clearly on a mission. Rounding up the other dogs, the sitter quickly followed, frantic she would lose Sadie in the deep woods. Sadie stoutly bushwhacked through a mile of dense undergrowth to the exact location along the river where her mistress was in danger. Amazed, the group realized that, where there were no signposts or well-trod paths, Sadie had blazed a trail that would take her owner and the dog sitter back to a car, dry clothes, and warmth. Guided by love and instinct, Sadie had found and rescued her person.

Some months later, she blazed another trail, this time up the aisle as her mistress’s flower girl.

Sadie’s Lesson: Choose with your heart and hold that connection wherever it takes you. 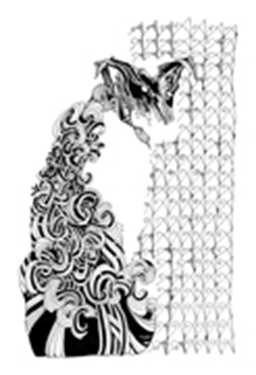